Founded on the 22nd of Daedalan, 623 years after the fall of the Seleucarian Empire, Targossas, the Dawnspear is the city of Good. Heralded as the Dawnspear, its foundations were laid by the Bloodsworn Gods Themselves as They embedded the legendary Sword of Dunamis into the bank of the Zaphar River. This act created a new branch now called the Silverveil River, which runs to the east coast south of Delos and through the newly formed archipelago that makes up the city as it stands today.

Presided over by the Conclave of the Dawn, the government of Targossas is composed of four divinely-appointed Lumarchs. The Prophet of Enlightenment takes care of the cultural aspects of the city, overseeing the Academy and application procedures, as well as other ministries tending to the spiritual well-being of the populace, while the Prophet of Justice handles disciplinary and security-related matters. The Hand of Dawn is responsible for the Targossian reporting system, finances, record-keeping as well as the appointment of new Ministers. Finally, the Dawnlord is the city leader, ensuring that the Bloodsworn may see Their vision becoming reality. An array of ministers report to the Conclave and see to the smooth running of the major functions upon which every city-state relies. The city is, as Shallam was before it, a theocracy, its citizens trusting to their Gods to guide and to lead them.

Targossian policy is noted for its "city first" integrity. All citizens are also allowed to become members of the Dawnspear's three Houses - The Dawnblade, Luminai, and Harbingers of Redemption, though this is not a requirement for a citizen of Targossas. No ties to foreign powers are permitted of those who dwell within those hallowed halls. As the scion of Good, Targossas shares Shallam's former antipathy for Evil, Chaos and Darkness. Aggressively stamping out these forces features prominently in Targossian civic life. 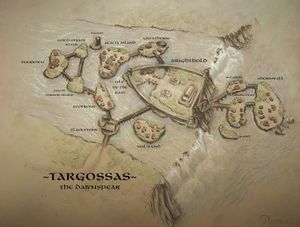 Former Shallamese denizens who were diligently evacuated during the invasion of that ancient city. Some escaped with the adventurer refugees to New Hope while others took refuge for a time in other places such as Cyrene and Jaru.

The facilities of Targossas are primarily found on the government isle of Brighthold, in the centre of the city.

Targossas has a wide range of food, drink, and entertainment for its citizens and their guests: