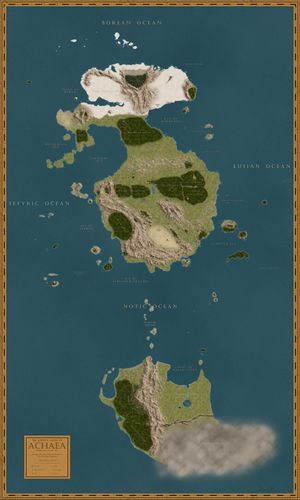 The continents of Sapience (top) and Meropis (bottom)

Achaea is the planet closest to the sun. The world is spherical or near-spherical in shape and comprises significant quantities of the four elements manifested in its atmosphere, seas, solid earth, and fiery magma within. The solid earth is formed into more complex materials such as stone, minerals, and alchemical bases, and its richness plays host to the plant life that forms the basis of many thriving ecosystems.

The planet of Achaea is orbited by a single moon and surrounded by three rings. The first and innermost ring is a glassy obsidian in colour, the middle ring is a gleaming silver, and the outermost is comprised of pale crystal. The orbit of the comet Ethian brings it close to Achaea on an annual basis during a time known as Ethian's Crossing.

One rotation of the planet is known as a day, and one revolution around the sun takes 300 days, a year. The year is divided into twelve months of 25 days each, and it passes through four distinct seasons.

Three continents are known to exist upon the planet's surface: Sapience, Meropis, and Therophage. Beneath these sprawl the ineffable dark of the Underrealm. The majority of the surface is covered in oceans, through which countless islands are scattered. Achaea's environments vary widely, ranging from frozen ice sheets near the poles to deserts and tropical jungles near the equatorial regions.

The history of Achaea is tied intimately to that of the continent of Sapience, for it is on Sapience that the story of humanity began. As such, Achaean events provided the spark that ignited into the Chaos Wars and so united the whole of the multiverse in war. Across the planet, from the earliest prehistory well into the Modern Age, a variety of cultures and peoples have developed.

Though it was once the fourth planet from the sun, the first three planets — Noxtra, Lunastra, and Somnustra — were destroyed in a celestial alignment known as the Eternal Night. This left a vast field of asteroids and debris hanging in the cold of space until Mayan 14, 578 AF, when the remains were forged into the planet Nurazar by Phaestus and Twilight. So too was Nurazar destroyed less than two years later, on Phaestian 24, 580 AF, by the alchemists of the Cauda Pavonis.

The destruction of Nurazar left three distinct rings around the planet, with each part of the Supernal Triad having contributed a distinct ring: Noxtra the innermost, then Lunastra, and finally Somnustra on the outer rim.

Throughout the ages, the meaning of "Achaea" has sometimes been conflated with the concept of existence as a whole: the planes in their entirety, plus the space between. This has been the source of many scholarly debates and misunderstandings.

There was once much contention as to the shape of the planet Achaea. The argument was considered settled by Sarapis when He proclaimed that Achaea-as-everything was "created in imitation of an n+1 Calabi-Yau space." This statement became famed during the Modern Age for both eternally silencing further discussion of this controversial subject and illuminating the extent to which mere mortal minds are unable to comprehend the complexities and insight of an omnipotent Logos.