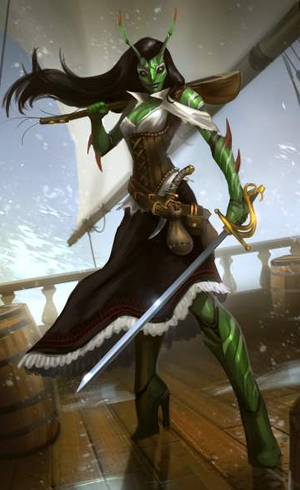 Horkval are at home in almost any environment.

Members of the Horkval race are powerful, though not particularly intelligent, armour-clad insect-like humanoids. Used as shocktroops by Aegis, God of War, during the battle on Nishnatoba, horkval are fearsome allies, who show no fear in battle, and who work together on a level surpassed only by the crystalline Kx'khrah.

Their origin is not known, but it is almost certain that they did not originate on the continent of Sapience, and possibly not even on this world. The Rapo'kir Hive settlement of Horkvals resides on the island of Ulangi, but whether that was where they originated or were simply placed by the God of War as reward for their deeds done is not known. However, the hobgoblin Blademaster Matic Ridley's accounts pertaining to the Black Wave describe beings matching the description of Horkvals as living in the Underrealm. They are known to exhibit a hive-like social structure.

Horkval are characterised by armour-like exoskeletons or carapaces in many different colours. They stand taller than most humans, on par with rajamala and xoran, but are generally shorter than trolls. Some have more insectoid features than others, such as mandibles and antennae. Hair, while uncommon, is not unheard of.

One of the Great Phalanx have: