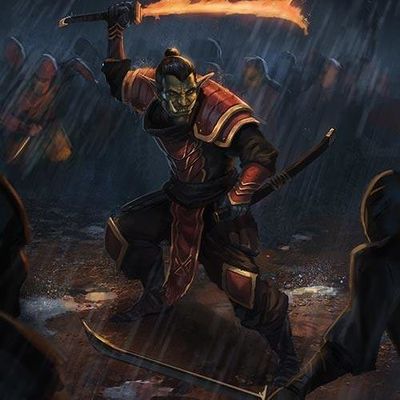 Famously displayed in centuries past by a great foreign hero, the ancient skills of the Blademaster were lost to history, but rediscovered in the modern age. Encompassing mastery of sword and self, these agile swordsmen strike as the wind, outrun the rain, and can cut a circle of death through the bloodiest battlefield or darkest alleyway.

Originating in the distant continent of Kashar, the Two Arts and their companion martial practises came to the shores of Sapience with the mercenary Lucaine Pyramides. Rising to spectacular prominence in the succession wars of the troubled Seleucarian Empire, he fought for the beleaguered Princess, cutting a swath through enemy forces to turn many a battle with the impossible precision of his weapon, Three Moons. The sellsword turned hero met an untimely fate, and his ways and knowledge were lost alongside his fabled blade. Centuries later, questing Kashari marauders on a mission of pursuit set about a series of events that saw the hero's sword rediscovered and the way of the sheathed blade returned. Now shared with those who would learn by the Hatha-yin maiden Kavaya, descendant of the bloodline of Lucaine, the path of the Blademaster is one of physical training, mental discipline, and supreme combative prowess.

Unarmed, a Blademaster is a formidable opponent, well-versed in the vulnerabilities and pressure points that can leave a foe reeling and helpless. With his sword at his side, each one bearing a name unique to its wielder, a Blademaster is a force of death. Drawing and resheathing their blade with each attack, swift slashes accompanied by precise, unarmed strikes, a Blademaster's furious onslaught is further strengthened through the Shin trance. Concentrating the rhythm and pulse of battle, Shindo permits terrific feats of might and power.

A fledgling Bladmaster possesses the skills of TwoArts and Striking, gaining Shindo upon embracing class.