From AchaeaWiki
(Redirected from Atavians)
Jump to navigation Jump to search 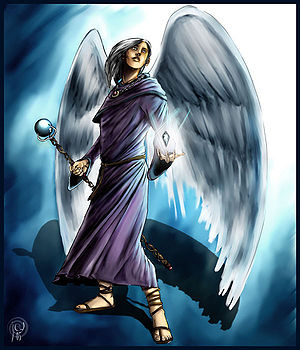 Atavians are known for their ability to fly

Members of the Atavian race hail from the floating cloud city of Arcadia, their ancestral homeland, though the settlement of Genji exists in the Southern Vashnars. Atavian origins are a shrouded in mystery, but are generally understood to be an offshoot of the human race. Their most obvious differential trait is the feathered wings gifted to them by Vastar which allow them to fly like eagles.

Aside from their wings, atavians look the same as humans. Their wings are typically white, though it is common to see a blue or grey tinge to the feathers. Other hues such as red, gold, and brown are unusual but do occur naturally. Their skin is pale and tans easily, though dark-skinned atavians are very rare. Hair and eye colour conforms to the typical human spectrum, as does their physique - that is, they may be found in all shapes and sizes.