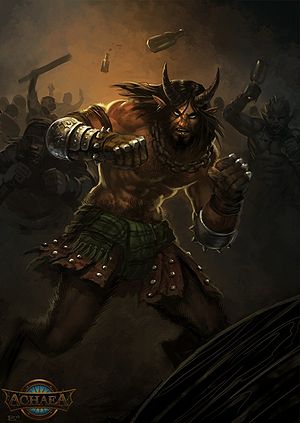 Satyrs are known for their merriment and goat-like features

A jovial race composed entirely of males, the Satyr is known for his carousing and robust appetite for women, though not all members of this race conform to the stereotype. The choice to become a Satyr only presented itself to adventurers beginning in 287 AF, when Varian began randomly changing the races of some mortals to Satyrs and Sirens during the Aetolian Saga. However, there had already been denizen Satyrs, such as Faun, long before that.

Though they possess the upper body of a human man, Satyrs sport powerful goats' legs below. Most have a pair of horns on their head, ranging from small, pointed nubs to large and curling projections like those of a ram, and may decorate them. Facial hair is common, and hair and eye colour is as varied as the human range, though their lower body generally bears coarse hair ranging in colour from brown to black. Due to some unknown reproductive property inherent to them, their offspring are either satyrs or the race of the mother.

These merrymakers benefit from: