This page is about the class. For other uses, please see Druids (disambiguation). 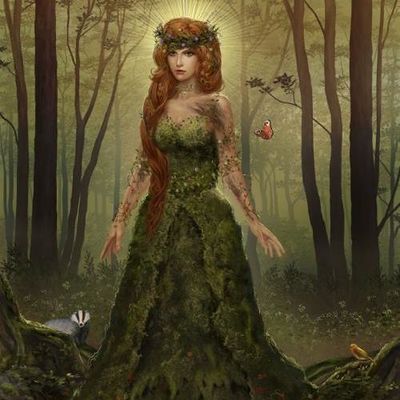 Druids are the most ancient of the forestal classes, devoted to the forests and all they represent. Although their isolationist nature has tended to remove them from the great events of history, the formation of the forest commune of Eleusis in modern times (as well as the formation of the Council of Oakstone) has given Druids power that extends beyond their beloved forests. Members of the Druid class tend to stay clear of the near-religious battles between good and evil that dominate much of the land, preferring instead to focus on what they deem good: The welfare of the forests. Though some Druids are loners, there is a thriving forestal community, and some Druids are as social as possible.

The skills of a Druid are rooted in forest and beast. Perhaps the most important is the ability to establish a location in the forest as his personal grove, from which much of his power flows. Within his Grove, none can stand against a Druid; there they reign supreme, backed by the full power of the forest. Swarms of bees will attack enemies, an earth golem can be made to guard the grove, lightning can be called down, thorny vines summoned to hurt and hinder your enemies, and far more. A Druid can travel through the forest instantly from his grove, and return to it equally quickly.

Outside of a grove, and even outside of forests generally, a Druid remains a force to be reckoned with, if not nearly as powerful as in the forest. They are able to tap into the remnants of natural life in a location, coaxing them to grow at an astounding rate. Through their power is Nature able to progress at a much faster rate, granting power to those who stand upon the reclaim land. Similarly, a druid is able to transform into a variety of different animals, ranging from the humble squirrel to the grizzly bear to the mighty wyvern. These transformations grant the Druid a range of new powers, from bird forms that allow flying to the skies above and swooping down to hoist a victim into the skies, to the elephant form that allows trampling an opponent, and a host of other capabilities.

A fledgling Druid possesses the skills of Groves and Metamorphosis, gaining Reclamation upon embracing class.