This page is about the class. For the House, please see Spirit Walkers. 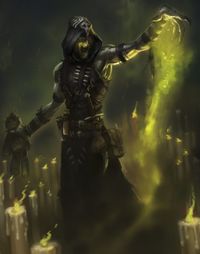 The enigmatic ritualists called Shamans hail from the wintry northernlands of Hashan. The class was born in 288 A.F. of the modern age, when Firefox Sly opened the Shaman's Guild to the world. Drawing their strength from the darker side of mysticism, the class of Shamans is not inherently aligned with any ethos. However, they tend to draw those who embrace the secrets of the shadows more readily than the light.

Fiercely spiritual and reclusive, Shamans practice the art of Curses, through which they can hex their opponents with a number of debilitating afflictions. They are formidable foes even from afar, for they can craft Vodun dolls and manipulate others, breaking limbs, causing bleeding, paralysing, even leech experience from a distance. A Shaman is a slippery opponent in combat, and once one has gained a full likeness of you, extremely difficult to overcome.

Forsaking their ties to the earthen magics, Shamans embrace the power of Spiritlore, allowing them to seek out and bind long-lost spirits into their body. These spirits grant a multitude of new powers, as well as augment their existing abilities in Vodun and Curses.

The skills of a Shaman are Vodun, Curses, and Spiritlore. A fledgling Shaman gains Spiritlore and Curses, while Vodun is gained upon embracing class.