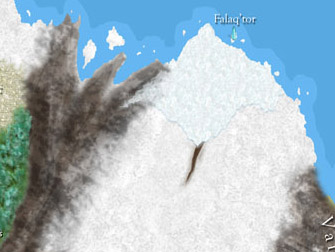 The Fissure of Echoes is a great chasm located within the tundra east of the Istar Jungle. A crack torn deep into the ground, possibly created from tectonic upheaval by the nearby glacier, it descends to an impressive depth, and a spiraling pathway permits access from brave travellers. Part way into the fissure, a cloud layer is encountered, and beneath it the icy chill of the upper half of the canyon gradually submits to a subterranean warmth that thaws portions of the fissure's deeper reaches. Descending the fissure itself is quite a feat of skill, as a constant, stiff wind tends to push even the most surefooted adventurers deeper than they may have intended while inadvertently attracting the attention of any number of some of the most dangerous creatures in the world lurking within.

Long ago it was told by the Tsol'dasi that Carme, who was lost in the northern wilderness, stumbled upon a a place of sublime beauty: a hollow amidst three icy hills. There, sheltered from the howling winds, grew a single fir tree. Snow fell lightly all round it, and Carme felt utter peace. As he rested beneath the boughs of the fir, he began to reflect upon the past. By the time Carme resumed his journey, he was overwhelmed by his memories. He wept for his family and for the idyllic times that could never again be. As he crossed the frozen wasteland, his tears fell hot to the ground, melting the ice behind him and creating a great chasm. Though no one knows if this is true, though there is a great salt lake presumed from Carme's tears.

Many dangerous creatures lurk within the Fissure, and gradually become more and more imposing the deeper one ventures. These creatures include: